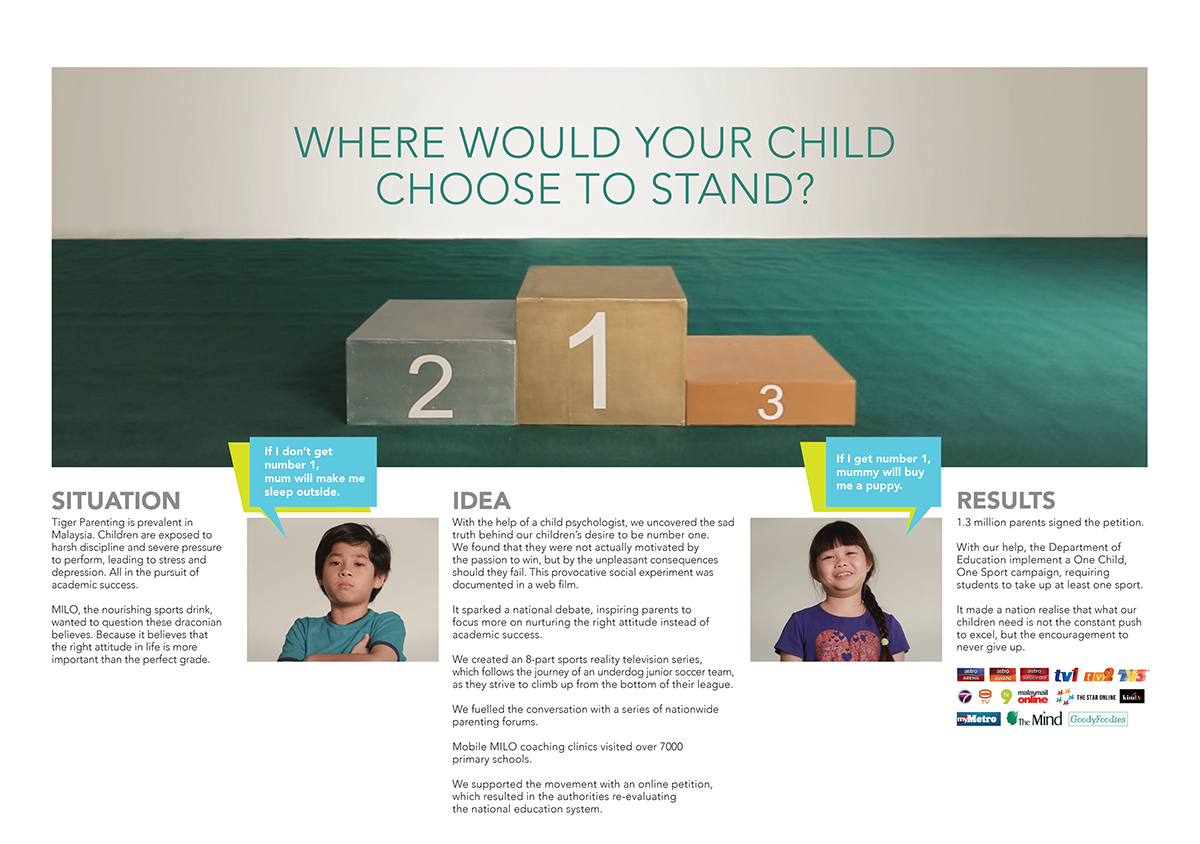 Ogilvy Malaysia 2015
For years, MILO was THE brand that championed the holistic development of children; but its cultural relevance was eroded by the rise of Tiger Mums who felt it wasn’t enough for their children to do well, they had to be the BEST. Qualitative research and social listening showed that Tiger Mums lead the conversations on child development and wielded a disproportionate amount of influence. Holistic Mums were more passive in their behaviour.

Our strategy was to deliver a provocation so hard-hitting, it would spark a debate that would get Holistic Moms off the benches and into the dialogue, making them our advocates and reframing the conversation about child development from the immediate gratification of the perfect grade to nurturing the right attitude for long-term success in life.
Tiger Parenting is prevalent in Malaysia. Children are exposed to harsh discipline and severe pressure to perform,leading to stress and depression. All in the pursuit of academic success. MILO the nourishing sports drink wanted to question these draconian believes. Because it believes that learning the right attitude in life is more important than the perfect grade. With the help of a child psychologist, we uncovered the sad truth behind our children’s desire to be number one.We got them to pick a spot on a podium. Most of them picked the number 1 spot.When we asked them for the reason they chose that spot, we found that they were not actually motivated by the passion to win, but by the unpleasant consequences should they fail. We ended the film questioning if we are putting too much emphasis on being number 1. This provocative social experiment was documented in an online film.We seeded the film with influencers, bloggers and on Facebook to help spark word-of-mouth. We also had pre-rolls on Youtube. It started a national debate about parents focusing too much on academic success. Parents tweeted their own stories to inspire others to focus more on nurturing the right attitude. We fuelled the conversation with a series of nationwide parenting forums.Mobile MILO coaching clinics visited over 7000 primary schools.We supported the movement with an online petition, which resulted in the authorities re-evaluating the national education system.  It made a nation realise that what our children need is not the constant push to excel but the encouragement to never give up.

Milo, Champions Never Give Up